Jealousy is a complex problem that may pretty easily cause disarray in the relationships between people. Jealousy does not come alone. It is usually accompanied by contempt and hatred. You should avoid being jealous at any cost. There’s absolutely nothing good or useful about jealousy. But why are men jealous? These jealous men confuse jealousy with love. Jealousy in men appears because of the possessive and exploitative approach to women. Even when a man doesn’t date a girl, he can be frustrated because somebody else does. Read the following guide to know everything you need to know about men and jealousy. 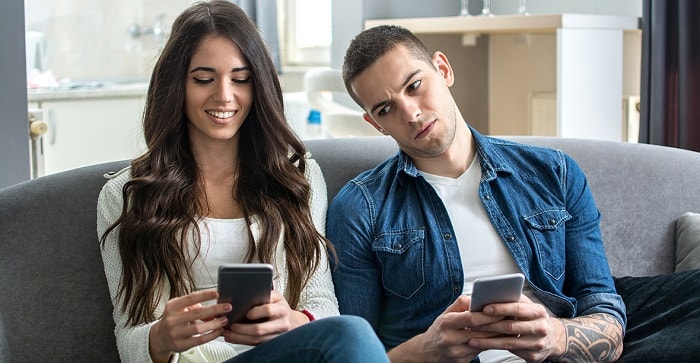 The Psychology of Men's Jealousy

Love is Not Defined by Jealousy

When you like or love somebody, you should not try to control a woman or try to own her in any way. Unfortunately, men like to possess women and demand submission. Why do men get jealous? Perhaps, this is caused by historical and social reasons. Nowadays, in the era of feminism with women being liberated from submission, a lot of men find themselves confused when they don’t get to have a woman all to themselves. In truth, you cannot and shouldn’t control a person you love in any way. Moreover, you cannot love and control at the same time. In case you control somebody, it shows that you don’t have any love to offer. The more jealousy there is, the less love remains.

So, why do men get jealous? There are many causes of jealousy in men. For starters, men think that if a woman is free she may reject, cheat or hurt them in some other way. That is why men try to control women. In this way, men deprive women of liberty in order to stay safe. When a man controls a woman, he makes himself responsible for anything that might happen. In other words, men get jealous because they consider women’s freedom to be dangerous for them.

By controlling women, men have a power to control everything themselves using a woman for pleasure and comfort while avoiding risks. Men become possessive out of fear they might lose a woman. However, even though paradoxically it proves they care and love women, rejecting women’s freedom shows that jealous men are egoistic and, in fact, love themselves and not their women.

True love is voluntary. If a woman wants to be with another man, it means there’s no love present. Therefore, why trying keep a woman by your side if she doesn’t love you? In case she truly loves you, there’s no reason for you to be jealous. Still, jealousy often appears without any particular reason.

The Opposite of Love

Jealousy is the opposite of love. With men behaving badly jealousy is to blame. Jealousy ruins mutual understanding because men think they are better equipped to know what is best for women. Logically speaking, jealous men love themselves through their women. That is why jealousy is unethical. Jealous men use women as means to achieve their goals. To be ethical, one must allow another person to decide individually for himself/herself. How can one love and be jealous at the same time? This is impossible because to love a woman means to allow her to act as she wants. Any other kind of behavior forced on women by men makes love insincere. And insincere love is not love.

According to the recent statistics, more than 65% men reported they have been jealous at some point in their lives. One may wonder whether all men are naturally predisposed to being jealous. Historical reference to the patriarchic age might help understand why most men can be jealous. Patriarchic age is one of the causes of jealousy in men. Men’s will to possess and exploit women by owning their freedom can be explained historically.

Why do people get jealous? In the past, society existed under patriarchic paradigm. Men were not as jealous then because they owned women. Nowadays, modernity gave women their freedom. This might have caused men to suffer from jealousy because they no longer call the shots in the relationships. Therefore, the existence of jealousy is normal because it is widespread and historically justified. Moreover, people were jealous throughout the whole history of humanity. Take, for instance, Shakespeare’s “Othello”, the most famous story about jealousy. Believe it or not but, paradoxically, one may love and hate a person at the same time.

Even though some men may be naturally jealous, they do not control it. One cannot simply make a decision and start being jealous. It is more like an illness that disregards men’s wishes. In other words, men are jealous not by intention. However, pathological jealousy in men should be confronted and challenged. Jealousy is a feeling of unfulfilled desire. In fact, this desire cannot be fulfilled without violating ethics. One must deal with jealousy, battle it, struggle with it, and make peace with the way things are.

Overall, jealousy often goes along with love. When you love somebody or like somebody, seeing somebody else getting what you can’t get is hard. It is irritating, depressive, traumatic, and stressful. Being jealous is the way your mind deals with such situation. In other words, you are sad as any person not getting something desired would be.

Why You Get Jealous Even If You Don't Date Her

Have you ever asked yourself “why am i so jealous” of a girl I didn’t date? It means that you want to date this girl. You may not love here yet but you are definitely interested. Now that you know why people get jealous, you should understand that possessive intentions do not work for you. You cannot attract a girl or start dating her by being jealous. It will only alienate a woman from you. Nobody likes jealousy even though most of the people become jealous at some point in their lives.

1. You Are Jealous Because You Don’t Date Her

It is really interesting why do guys get jealous when they do not date girls. Being unable to date a certain girl or being rejected can cause jealousy. Moreover, an unfulfilled desire gets to irritate a man in case he sees the girl he wants with somebody else. In this case, men usually think like that: “if I don’t date her, then nobody else should”. So, a certain girl should be alone her whole life only because she doesn’t date you. Or else you will be jealous. Real love, though, requires you to let a person you love choose individually. Still, men often get jealous exactly because they don’t date a girl. And they can’t help it.

2. You Want to Possess and Exploit

You’re wondering “why do I get jealous?” That is because you want to own, possess, and exploit a girl. As it was mentioned earlier, this is the opposite of love. It would be wise to avoid such approach and have a more appropriate behavior. You should behave in an ethically right way and let a woman decide on her own. Only then her decision will matter. Moreover, most likely she won’t let you control her anyway. More than half of all modern women apply ethics of feminism in their life. You may find a woman that wants to be controlled or is willing to give her freedom away. The question is whether you would really enjoy it or not?

3. You Do Not Express Love

Often, men get jealous thinking they love somebody. However, even though love and jealousy go hand in hand, you cannot love and be jealous at the same time. So, for example, if you really like a girl that dates somebody else, you should have strength to let her go. If you really love somebody to the point of being jealous, you should confront your jealousy and allow a woman to be happy. You don’t really want to date somebody who doesn’t want to date you. It would be insincere and hypocritical. You will not get any pleasure and happiness from that.

4. You Are Old Fashioned

You are out of time because your intentions to possess women or disallow them to be with somebody else except you have no place in the modern world. Feminism and women’s emancipation is a reality. Women are no longer subjected to men. You should embrace the equality and make a woman decide for herself whether she wants to be with you or not. And you should have enough strength to deal with the fact that somebody you like may not want to date you. It may be painful, stressful, and traumatic but you don’t have any other choice. So, deal with it and stop being jealous.

Jealousy is an illness. It makes you obsessed with a woman that you don’t even date. This is called rumination because your whole existence becomes centered on a certain woman you’re jealous of. You harm yourself doing it. It is like seeing a cake in front of you that you can’t eat. Imagine somebody else eating it in front of you with you being unable to take a bite. Imagine yourself being very hungry. That is what jealousy makes with you. It exhausts and works in the same way stress does. In fact, jealousy can lead to stress and depression. So, next time you’ll be asking yourself why do men get jealous, keep in mind that they suffer this way. Suffer because they can’t get what they want to get. Seeing somebody else getting it only makes everything harder. You have no other choice but to deal with it for your own sake.

All in all, now you know the most important things about jealousy. Men are historically predisposed to being jealous. That is because they were dominating women in the past but cannot do it anymore. Emancipation of women made them equal to men. Therefore, you can’t and you shouldn’t try to possess, own or exploit women. You shouldn’t be jealous of a girl you don’t date either. This lowers your chances to date her. Jealousy alienates people and causes disarray in relationships. Not dating somebody you want to date automatically makes you jealous. Confront your jealousy and put it away at any cost. Good luck!