Signs and Symptoms of Emotional Abuse in a Relationship

What is emotional abuse? Emotional abuse in a relationship is an effective psychological impact to establish power over a partner. For outsiders, it is often intangible and unnoticeable. Emotional abuse causes the same harm as physical one, and, often, it is accompanied by the threats of intimate or physical violence. Recovering from emotional abuse can be quite hard and sometimes impossible. Throughout life, people maintain different relationships with others. There is a certain type of destructive relationship with a person (a psychopath, an emotional vampire, a perverted narcissist) in which the other person becomes a victim. And this can happen to anyone.

Quarrels and reconciliations are normal in a couple, but if they occur too often, there are some foul things at play. Emotional abuse is not always obvious, in comparison with a physical one, when you are pushed, grabbed, or beaten. It can be insults, intimidation, humiliation, tracking your every step, refusal to listen to you, disregard for your feelings, lies, sexual harassment. Below you find a list of types of emotional abuse that can take place in a relationship. Note that those who have experienced a dysfunctional childhood have the greatest risk of being emotionally abused in life. These are children who were shouted at, intimidated, humiliated, morally and physically suppressed, and overall those who haven’t got it easy. If your childhood was filled with emotional ups and downs, as an adult you can take this type of relationship for love. Here are the signs of emotional abuse in marriage worth paying attention in order to take action in time.

1. You try too hard to satisfy your partner

First of the signs and symptoms of emotional abuse. You do all that you can, go above and beyond. You probably behaved in the same way with your parents, and now - unconsciously - at home with your partner. You prefer to keep quiet, keep your opinions to yourself, so as not to rock the boat, you by all means justify mistreatment. These are all signs that you are not listening to your inner voice. Whenever you are in doubt - “Can I get upset about it?” - you miss the important things that your inner voice says.

2. You have no time for friends and family

You do not have time to meet with friends, like you used to back in the day, because you are too focused on your partner. Instead of going somewhere and having fun together, you spend the weekend shouting at each other. You begin to feel isolated - a partner requires that you pay attention only to him. Perhaps you justify him and find justification for his behavior. Gradually, the victims lose their self-confidence and begin to blame themselves for all the problems in the relationship.

3. You try too hard to avoid conflicts 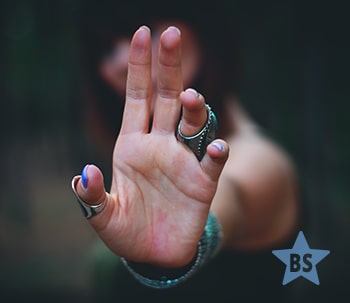 Instead of saying everything that has become painful, you are silent to keep the peace. And you avoid conflicts in any aspect of life, not only at home but also at work. Perhaps you do it out of habit or because you are too tired and do not find the will to freely express your point of view after so many conflicts at home. Defending your interests now is an impossible task for you; it is much easier to adapt than to worry that your disobedience will turn into tension in a relationship.

4. Your needs and desires are gone

When you are in an abusive relationship, as we’ve said, all the attention and all the thoughts are focused on your partner. Thus, your life starts to be all about that person, what do I do to satisfy him? I should not upset him, I should be at home, instead of visiting my music classes, they can wait. You have traded your own personal growth for being a supporting actor for somebody else.

5. You expose yourself to danger

This may be, for example, his aggressive high-speed driving style. You are frightened and angry but keep silent so as not to provoke an attack of rampant rage on his part.

6. You are really tired

All day you feel terribly exhausted. It is becoming more and more difficult for you to solve the elementary everyday tasks related to your vital needs - your head is in a daze, and you are no longer sure that your needs are so important. You no longer feel like a competent person, you do not trust your knowledge and experience.

7. Sex goes against your will

You do not want, but have sex - just to keep the peace. Is this a common thing? Every time you do something against your will just not to go into conflict, you give your strength to others, you betray yourself.

Recently, you severed the relationship forever - only to forgive again and promise to love each other until the end, yet it happens quite often. You forgive cruel treatment, give one last chance and believe empty promises that are never fulfilled. True love assumes that both partners are equal, they both give and take in the same way. Of course, sometimes we can do something that we don’t want to, for the sake of a loved one, but when such actions become a habit, this is a bad sign. If two healthy personalities love each other, they respect each other’s boundaries, share the burden of guilt if things go wrong, and together try to find a way out of a situation - without mutual insults and rage.

This is violation of the psychological boundaries of the individual. This is about verbal and emotional abuse manifested in the form of insults, humiliation, swearing, excessive control, refusal to speak to. People who tend to feel emotional abuse in relationships have been, most likely, sexually, physically or mentally abused as children, due to which they have low self-esteem and are now completely helpless. Effects of emotional abuse can be quite dangerous and can last forever.

This is any action that can actually or potentially lead to physical damage, from bruises and scars to broken bones and death. This includes fights and beatings, physical injuries, slaps, etc. This is the most terrible kind of abuse, which often ends in death. Very often the abuser skillfully manipulates the victim, convincing her that she herself forced him to use physical aggression.

It is necessarily associated with the psychological abuse, as its goal is to humiliate a woman and to “put her in her place”. It implies that depriving a woman of funds is necessary for the acquisition of objects vital for her. It is the most common type of spousal emotional abuse.

This includes incest, violence in the marital relationship, and rape. Sexual abuse leaves a deep psychological trauma that leads to the formation of borderline personality disorder, suicidal behavior, a tendency to self-harm, violations of sexuality, etc. So, long-term effects of emotional abuse of this nature can be very devastating.

There are three main reasons for emotional abuse in a relationship:

1. Violence as a way to assert oneself

By applying violence to others, such a person asserts his status as the leader, the one whom everyone in the family should be afraid of.

This also includes all cases of aggressive violence related to mental disorders in the family, for example, psychopathy, sadism, sociopathy.

2. Violence as a response to self-abuse

A completely natural reaction of any family member to self-abuse, which inevitably arises unless the victim understands that violence (“punishment”) was applied to him fairly and for his and his family’s good. Yet most often it doesn’t come to realization. This is basically anger and frustration lashing out on the people that are closest to you.

3. Violence in the name of order

The most frequent and most difficult reason is domestic violence as a way to maintain order in the family. Here, violence or the threat of it is used, consciously or unconsciously, to “curb” and “revive”, both an individual family member and the entire family. Who is the “commander-in-chief” of the family, where does the aggression and violence come from? Anyone could be in this position. But the basis for this is the deep conviction that it is precisely his norms and rules of the family that are correct, and that they need to be literally planted violently so that the family can be well. And it is clear that each person can profess and adhere to his ideas about the family and the order that should reign in it. But in a normal family, in a family where there is no violence, there should be a single or similar idea about the order of the family’s life.

How to Stop Emotional Abuse

To fully avoid the chance of domestic violence is, unfortunately, impossible. Not because you or your family members are bad, but because there are no people with exactly the same views and interests. On this basis, in fact, a conflict arises.

How to deal with emotional abuse? Consider the following:

1. Firsts off, before you move any forward, learn the person with whom you plan to build a relationship with. Do you think that this relationship, its highs and lows won’t bring a person to emotional abuse towards you down the line?

3. Try to find the weakness of the abuser, know how to strike him where it hurts and explain that what he does is not acceptable. Stand up against the abuser and tell what you think to his face. We all have our weaknesses, most of us are open to criticism if presented right, some less, some more, yet it is the case. The criticism should be repeated, since the natural reaction to it at first will be just protection of personal beliefs and actions, a person should gradually come to the fact that he is wrong.

If you nevertheless decided to leave the tyrant (which, by the way, is not so easy, for he will try to hold you back and return you by intimidating or lying to you), then the best way is to tell everyone about the situation and find protectors (new lover, brother, father, friends, etc.). In no case should you neglect hot lines and the help of psychologists in overcoming emotional abuse. There is nothing shameful about it. And drive away the thoughts like “What will people say ...”. It is your life and well-being and your children, and if people say something disapproving, they are not your friends. A specialist will help you cope with depression and make a sober decision, and not the one that you made on the spot.

And remember, according to the constitutions of absolutely all countries, a person has the right to be happy! And do not neglect this right for the sake of someone who treats you so horribly and selfishly.